Deciding that Episode Vetoes were a bad idea for DS9, (both because they weren't familiar enough with the episodes and in practice from TNG), but still wanting a game element in the next episode section: Ben & Adam decided to introduce an element for random drunkenness.

Starting with season two of DS9, Ben and Adam decided to change things up by employing a Chutes/Snakes and Ladders style board game with various "traps" resulting in possible podcast themes. At the end of each episode, the virtual die is rolled, and Ben and Adam advance as many spaces on the board, resulting in either a blank tile or an action tile to be carried out in the next episode's review. The original board ran from episodes 197-227, when they completed the run at space 100. A new board was designed starting on episode 228, which added some new spaces and changed the layout, and it ran until episode 258. A new reset began on episode 259, which added three new squares, which replaced a Traveler, Quark's Bar, and Banger space on the board.

The initial odds/calculations for each action tile being rolled were calculated by a very devoted FoD, and can be viewed here:

DS9 Board Game: How Likely Is Each Square?

The board game and accompanying key for the action tiles can be viewed here:

Game of Buttholes: The Will of the Prophets

The list of moves made on the game board so far can be found in the Deep Space Nine Episode List. 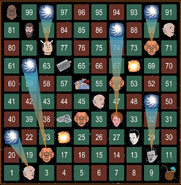 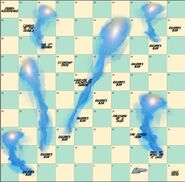 The first season of Ben and Adam's coverage of Deep Space Nine included (about ten episodes in), Ben rolling a virtual die to see if they would have to have a drunk episode to follow. Since there were 15 remaining episodes when they began, the "winning" roll would be a one out of fifteen (something they achieved once, on the first try).

Retrieved from "https://greatestgen.fandom.com/wiki/DS9_Board_Game_(Game_of_Buttholes)?oldid=7489"
Community content is available under CC-BY-SA unless otherwise noted.