Where No One Has Gone Before

The A-Team of Away Teams
Fish vs. Dog

When the Enterprise crew throws the keys to the ship to The Traveler, he drives it farther out than its ever been before. That is not cool to Captain Picard, who wants to go home immediately. That bit of engineering would be a whole lot easier for The Traveler if he didn't also have lobster-hands. Finally, Ben makes an embarrassing admission about his relationship to Wesley that could change our view of him forever. It's the episode where we finally realize our potential as the two Beethovens of podcasting!

For re-naming himself "Wesley" at summer camp

Ben's pick is Random crew member in hallway of fire

For having to "put the flame out in your thoughts!" 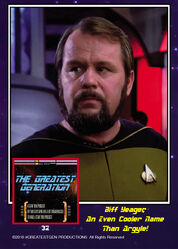 Biff Yaeger, An Even Cooler Name Than Argyle! 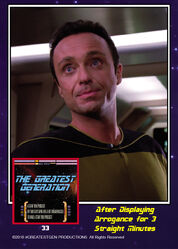 After Displaying Arrogance for 3 Straight Minutes 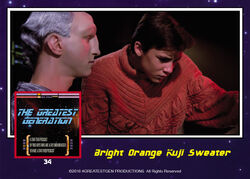 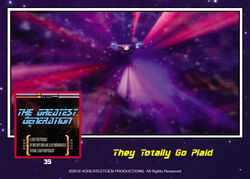 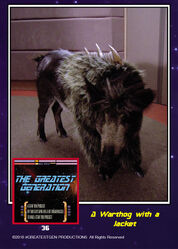 A Warthog with a Jacket 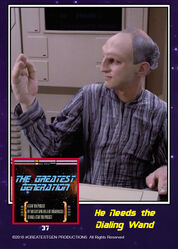 He Needs the Dialing Wand 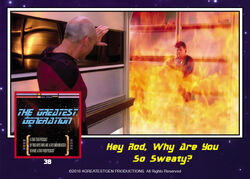 Hey Rod, Why Are You So Sweaty?
Add a photo to this gallery
Retrieved from "https://greatestgen.fandom.com/wiki/TNG_106?oldid=2804"
Community content is available under CC-BY-SA unless otherwise noted.